A Breath of Fresh Air

Archive for the tag “Cragg Vale” 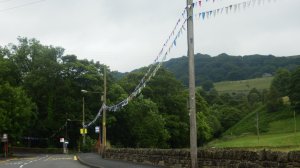 Cragg Vale, in addition to being the longest continuous incline in England, has now just beaten the world record for displaying the longest string of bunting! It is 12,115 metres or 39,750 feet long and is made with 52,939 flags. Phew! Another Tour expedition was definitely required! 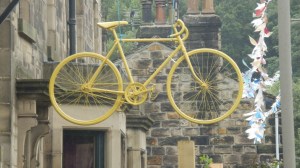 It was well worth the effort. The whole road, leading up from the village of Mytholmroyd, right up Cragg Vale’s steep ascent, and on up on to the open moors beyond, was bedecked, not only with home-made bunting, but also with yellow bikes, stuffed cyclists and a field with a cyclist imprinted into the grass. 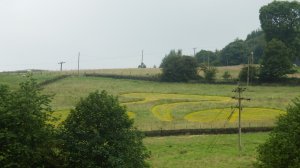 We slowly made our way up the five-and-a-half miles of winding road, avoiding the cyclists toiling around us (cyclists are multiplying by the day!), marvelling that the bunting was still with us, all the way! As we climbed, I wondered how the bunting could reach the exposed summit. There were no handy telegraph poles up there!

We found out soon enough: they were simply attached to the fence posts at the edge of the moors. Somehow they looked just right, with the cotton grass waving behind them. A unique sight! 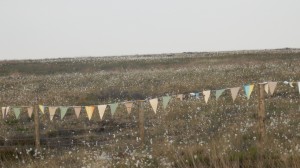 It was a beautiful evening and the sun was just beginning to lower over the empty moors, softening the beautifully desolate landscape.

We watched the steady trickle of cyclists coming up the road, knowing, but not quite able to believe, that this was nothing like what would be happening here and for miles around, all too soon!

Le Tour is Coming to Yorkshire!

There have been subtle signs over recent months that something is happening, such as the increasing number of cyclists to be seen climbing the steep hills round here (and, slightly disconcertingly, more of them have been wearing lycra: this is not necessary!).

As Le Tour draws near, towns are being decorated in yellow or covered in polka dots, and yellow bikes are appearing in shop windows. In Hebden Bridge, the decorations are fun and varied.

People have been discussing where they will be watching the peloton and, more importantly, how they will get to the point where they can watch … and what time they need to get there. (Frustratingly, this will require more thought for me with having mobility issues, but we are hoping to arrange something vaguely complicated involving the tandem … I will report back after the event!)

I was very excited recently to see Chris Froome and other members of Team Sky whizz past through Hebden Bridge as they test rode the route. Well, I think it was them – I saw four skinny blokes flash by in light blue lycra! A glimpse of what it will be like on race day I fear, though without the amazing atmosphere I’m expecting. 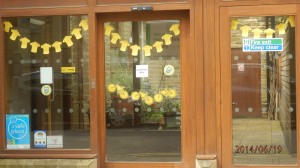 Earlier in the year our two local television news presenters from Look North, Harry and Amy, rode the entire route over a week on a tandem to raise money for Sport Relief. I went along to cheer them – how could I not support fellow tandem riders?! I saw them battle their way to the top of Cragg Vale (at 5.5 miles, the longest continuous gradient in England, as anyone round here will tell you!). It was an early taste of the rising excitement that the event is generating.

At my work next week there are various bike-related activities, including a time trial up Cragg Vale … I think I’ll be cheering people along rather than participating in that! I might be able to take part in the Wear it Yellow day. That is, if I can find something yellow to wear!

I’m going to see what else I can find connected to the Tour between now and next weekend. I’ve got to make the most of this once-in-a-lifetime event on my doorstep. I know the riders will go past in a flash, but it’s the buzz around it that is just as exciting! 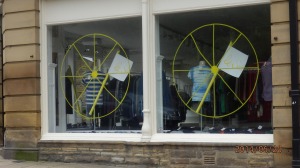