A Breath of Fresh Air

We had a tip-off for a suitable birdwatching site! It was an RSPB reserve at Fairburn Ings. A check of the website told us that there was a mobility scooter for hire, which could be booked in advance – so that’s what I did! 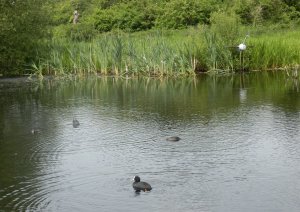 It was a lovely spot with different areas suitable for different bird species. The paths were flat and either gravelly or made from duck boards.

We headed for a small pool where children were busy pond dipping. Just beyond them, we could see coots flitting about. Adults were feeding their young and we even saw one collecting nest material to place on a splendid nest, seemingly suspended on the water.

Along another path a feeder screen partitioned the trees from us. There were holes in the screen at heights suitable for everyone. Well, we just had to stop and peer through these holes ourselves! Feeders hung from several branches and there was a steady flutter of wings as blue tits, great tits and sparrows feasted. We were also very chuffed to catch a glimpse of a woodpecker for a couple of minutes.

We then headed out towards a larger body of water where I was delighted to see avocets wading gracefully in the shallows, with their impossibly slim legs and their long curved beaks. I’ve only ever seen them in books before. Wonderful! 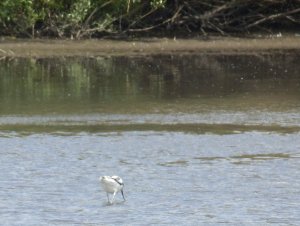 Pete’s day was made when we saw a great crested grebe sauntering along the water, surveying the world around him with his magnificent ruff of feathers around his head.

We spent several happy hours meandering about – there was a cafe too with space to sit outside (always a bonus!). Having the scooter was great too as it meant that I was independent and Pete could look after just himself, and we were able to be outside in a rural setting, amongst footpaths and trees … and lots of birds!

Posted in Out and About and tagged birdwatching, Fairbun Ings, health, MS, Multiple Sclerosis, Yorkshire

I'd love to hear your comments Cancel reply